My Place In the Universe When my daughter was three, our family went to the beach. I’d pulled half of her hair back in one of those rubber bands with two plastic balls attached. These ones were a pearly orange and I remember thinking how much they looked like little gum balls. Once, when Cadence and I were walking together in the sand, a sea gull dove down right at us. He flew away, but others got the idea and did the same. I realized they were aiming for Cadence and waved my arms to try to ward them off. I concluded later, when my wits returned, the gulls were after what they thought was candy in her hair – or maybe fruit. I don’t know, but it scared us.

Have you ever felt dive-bombed for no reason? It’s scary.

Especially when the perpetrators are loud and flapping with beaks. It overwhelms the senses, shuts down our brain’s frontal lobe where dignified thinking happens and leaves us at the mercy of our instincts: fight, flight, or freeze. I fought. I think Cadence froze, but no matter how you react, it’s not calculated. Think of people who’ve found a spot of ice and begun to slip. It’s hilarious because we’ve all been there, flailing around, trying to compensate for the off-balance weight. We don’t get to say, “Flailing will make me look foolish. People may laugh. I’ll just fall and hope for the best.” We react before we know what’s happening.

What takes you out of your frontal lobe? Are there so many demands on your time, you feel rushed constantly, that there’s no time to relax and that you can’t win because you’ll never get it all done?

Are expenses swarming around you instead, demanding attention so loudly and often, you don’t know where to look first or how to prioritize? Does it feel like the moment you pay one bill off another one swoops in and takes its place, so there’s no break in the bedlam?

Are the sea gulls your children who constantly need water or a shoe tied or attention for their story that goes on and on and on?

Is it your body screaming at you through various symptoms that something isn’t right and YOU are not okay?

What do you do when you feel this way?

I wish it were as simple as emptying a package of crackers in the sand and walking away. But even that takes problem solving finesse that’s not available to us in the moment. Thankfully, the answer is even more simple. Breathe. Isn’t it great that we do this without thinking? And when our frontal lobe function is back online, let’s not use it for berating ourselves or figuring out how to never be overwhelmed by anything EVER again.

We naturally want to figure out how to NEVER feel so scared and out of control again. We don’t like it. But strategy won’t save us. Nor will our vow to “Never be put in this situation again!” I mean, you can improve the parts of life YOU control, but the sea gulls are still wild.

We don’t have a baton we can tap and bring the whole universe under our control. We are simply one of the many forces of nature. My rightful place is the one I have, right in the middle of the strength spectrum. I’m stronger than a caterpillar AND I’m weaker than a tidal wave. My peace can’t be found in knowing I can go toe-to-toe with any force in the universe and win.

I used to ask this of myself – even beat myself up when I failed, but sanity says, this is ridiculous. So where can I get some peace?

Maybe from knowing this: The Force in the Universe Who CAN go toe-to-toe with all the other forces, is my Friend.

She holds the baton and though some of the movements sound awful to me, She promises to resolve it.

Sometimes I get bossy and talk to God during breaks. I give Her all my reasons why things should be different. She listens to all the things I’m saying and all the things I’m not saying and says, “Girl, you’re gonna love your Earth made new. But for now, you don’t have to make all the pieces fit. I’ve got that. You can just enjoy making music.”

And then, because I know She’s good and I can push Her farther than anyone I’ve ever known, I say, “But right now, I’m NOT enjoying it. I mess up and the people around me mess up. Between you and me, some of them don’t even seem like they’re trying. It all sounds like a bunch of noise!”

And to that, She doesn’t say any words. She just pulls me into a hug. She’s soft and warm and with my ear pressed against Her, I can hear the great, low beat of Her heart. The hubbub around me fades and all I feel is Her love – how She cares about me – and I feel peace. At last, I take a deep breath and let all my frustration go. She holds my little shoulders, the ones that try to hold the world, and says, “You can trust me. I WILL fix this. I will make all the wrong things come untrue. I promise.”

I look into Her milk chocolate eyes and nod. I feel like I can breathe again.

And then, I find my seat.

The one where I don’t have to have all the answers.

The one where I can see what I’m to do, one note at a time.

The one that’s right for me. Previous post How to heal your relational Humpty Dumpties 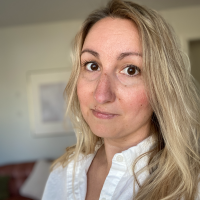 About the Author Soul Comfort

Kendra Carlson is a minimalist, born in Oregon but she loves Nebraska. She's a protestant, but not in a right-wingy kind of way, old house renovator, recovering perfectionist, thinker, designer, mamma, green enthusiast, believer, wife, survivor, artist. Cesar A. Cruz said, “Art should comfort the disturbed and disturb the comfortable." I write for those with troubled hearts, which is the group I find myself in most of the time. I hope this will be a place you can come to hear how kind and gentle God is and begin to relax. Because the Bible says male and female people demonstrate God's image, I find it helpful to picture God in a female likeness from time to time. For those of us who have had our relationship with our fathers damaged or severed, this can be especially helpful. (Hence the use of female pronouns in some of my posts.)